I was recently notified that my “rough beast” of a short story, “Behemoth,” has been accepted to Scott Dwyer’s upcoming anthology, Pluto In Furs.  The spectrum of the tale pendulums between 1969 and 1987, as my protag, Dox Ingram, a mechanic, is inadvertently compelled to confront a protean horror inextricably braided to a disturbing encounter during his younger years as a soldier in Vietnam.

“The title, Pluto In Furs, is obviously a play on Sacher-Masoch’s Venus In Furs,” writes Dwyer. “But whereas his book postulates that the female and the cruel are his objects of a masochistic worship, Pluto In Furs will explore what it means if darkness and the nonhuman are also worthy of masochistic worship.” That said, the anthology will also include some loosely-themed horror tales compassing the surreal, erotica, weird, as well as “quiet” ghost stories. Some authors have announced, while others are keeping their cards close to their chests; but I’ve had a glimpse at some of the imposing contributors, and readers are in for a sinister treat.

UPDATE:  February 5, 2019:  Official Pluto In Furs table of contents announced at The Plutonian:

“An Abysmal Masochism” (An Introduction) by Scott Dwyer
“The Tangible Universe” by Jeffrey Thomas
“The Wolf at the Door or The Music of Antonio Soler” by Devora Gray
“Other Yseut and Romance Tristan” by Adam Golaski
“Dermatology, Eschatology” by Kurt Fawver
“Headsman’s Trust: A Murder Ballad” by Richard Gavin
“It’s Hard to be Me” by John Claude Smith
“The Gutter at the Bottom of the World” by David Peak
“Tender is the Tether” by Rhys Hughes
“With Shining Gifts That Took All Eyes” by Mike Allen
“Stygian Chambers” by Orrin Grey
“Behemoth” by Clint Smith
“Worm Moon” by Gemma Files
“The Silvering” by Thana Niveau
“Walking in Ash” by Brendan Vidito

Dwyer’s aiming for an August, 2019 publication date.  More in due time… 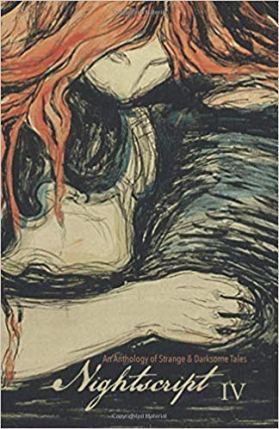 Now in its fourth permutation, C.M. Muller’s Nightscript anthology continues to house — within its slate-scrubbed clapboard, concealed behind murky panes — a series of stories which, due to their strangeness and peculiarity, may have never otherwise discovered a proper home.
A shrewd student of a number of creative mediums, Muller is neither clumsy nor casual in his execution of these annual projects; and it really is a demonstrative exercise in voice and vision — his conjuring, capturing, and making incarnate (from font, to paper, in artwork, in tonality) a singular aesthetic.

Nightscript, IV expectedly contains a number of top-notch stories penned by (as Muller is wont to do) many “unknown” scribblers — this is one of the fantastic aspects of the series, as Muller places emerging names in close proximity with established writers, as is the case in N.IV with appearances by V.H. Leslie (“Sugar Daddy”) and Steve Rasnic Tem (“By the Sea”). I was personally taken with L.S. Johnson’s “A Harvest Fit For Monsters” (a grim and ambiguous tale of war-torn grief); Farah Rose Smith’s “Of Marble and Mud” (a crisply written narrative focusing on the frightening and fragile bond between two sisters); and Mike Weitz’s “Rainheads” (bearing bleak shades of apocalyptic horror).  Joanna Parypinski’s “The Thing In the Trees” is a personal highlight for me—one of the most haunting and deftly-handled tales I’ve encountered for quite some time.

Nightscript alumnus Charles Wilkison (“The Dandelion Disorder”) makes a welcome appearance, as well as Christi Nogle (“Cinnamon to Taste”) and Daniel Braum (“The Monkey Coat”). Resonating, still, for me are the stories “There Has Never Been Anyone Here” by J.T. Glover; “By The Sea” by the aforementioned Mr. Rasnic Tem; and Kirsty Logan’s “My House Is Out Where the Lights End,” which serves as the publication’s breathtaking, closing punctuation.

Another part of Muller’s magic is his sapient strategy in weaving an ambiguous melody in the sequencing of the tales, yielding a unique resonance and eloquent undulation to each installment.

Nightscript is, of course, an annual celebration of the pleasant melancholies of autumn; but its contents are suitable for any timeframe in which a reader can carve out some solitudinal space, as the well-crafted tales call for your attention and close-reading consideration. More than this, Nightscript is — in Muller’s mental landscape — a vital venue for voices often lost beneath the wind-swept blanket of brittle, burnt-orange leaves — an otherwise unnoticed sibilance existing in the shadowed, foreboding fringes of a rickety-limbed forest.

Recently, Muller announced the forthcoming release of his first collection of tales, Hidden Folk. And if you’d like to get to know a bit more about this writer, editor, and self-described scrivener, check out an interview with Muller conducted by Scott Dwyer over the The Plutonian.