Sad news, as many have heard by now.  Richard Matheson has died.

I’d like to take a moment and record how several of his works influenced my initial and inchoate impulse to create my own stories.

In October, 2000, I was in Evanston, Illinois, browsing in the erstwhile bookshop, Something Wicked.  They had a copy of I Am Legend (1954) which (it shames me to say) I was heretofore unfamiliar.  I continue to cherish vivid memories of staying up late on a pair of nights, absorbing the grim situation in which Robert Neville had been cast.  Here are a few of my favorite excerpts:

“And they were all there for the same thing.”

“Something black and of the night had come crawling out of the Middle Ages.”

“Did they think he was going to come out and hand himself over?”

“Robert Neville was sitting at the peephole when they came.”

“Robert Neville looked out over the new people of the earth.  He knew he did not belong to them; he knew that, like the vampires, he was anathema and black terror to be destroyed.”

This particular paperback was the Chopping Block edition with the cover art seen below—the story and the artwork indelible to this young writer’s mind: 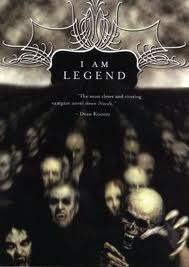 I swiftly moved on to Hell House (1971), a profoundly unsettling ghost story which provided a myriad of disturbing images and scenarios (you’ll never look at a life-size crucifix of Jesus again—guaranteed).

Four years later, I made my way around to Shirley Jackson’s The Haunting of Hill House (1959), and quickly observed the thematic influence on Matheson’s tale—I think of what Dr. Montague explained in chapter three of Hill House:

“Certainly there are spots which inevitably attach themselves an atmosphere of holiness and goodness; it might not then be too fanciful to say that some houses are born bad.  Hill House, whatever the cause, has been unfit for human habitation for upwards of twenty years.  What it was like before then, whether its personality was molded by the people who lived here, or the things they did, or whether it was evil from its start are all questions I cannot answer.” 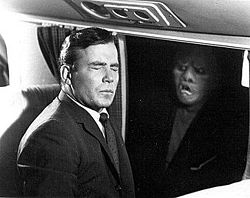 But probably the most wonderful memory I have of Matheson’s work is one in which I was oblivious to his responsibility.  I remember a New Year’s Eve when I was young, staying awake in the small hours beyond midnight to watch the Twilight Zone marathon.

Of course one of the episodes was “Nightmare at 20,000 Feet,” which would later provide some gleeful trauma in the version presented in Twilight Zone the Movie (1983).

And now my own young ones have begun their own introduction to Matheson.  Just recently, we watched the Incredible Shrinking Man (1957), or what our youngest refers to as “the big spider movie.”

Like Bradbury, the vast channels Matheson’s imagination remains one of the critical tributaries to modern fiction.  Like Bradbury, Matheson’s fingerprints are on nearly everything that inspires writers of the fantastic and the weird.

Saul Bellow famously said that a writer is a reader moved to emulation.

Thank you, Richard Matheson, for moving generations to emulation.